A 2009 scientific study on the human brain proves a correlation between instrumental music training and brain growth. In the study, researchers wanted to investigate the observation: that in adult professional musicians, one part of their brain (the corpus callosum) is larger than that of non-musicians. This is the part of the brain that connects the right and left hemispheres and allows for cross-brain communication.

This was originally published July 2009 in the Annals of the New York Academy of Science and titled: Training-Induced Neuroplasticity in Young Children.

Here’s a couple conclusions from that 2009 study

“We tested the hypothesis that approximately 29 months of instrumental music training would cause a significant increase in the size of particular subareas of the Corpus Callosum known to have fibers that connect motor-related areas of both hemispheres. On the basis of total weekly practice time, a sample of 31 children aged 5-7 was divided into three groups: high-practicing, low-practicing, and controls. No Corpus Callosum size differences were seen at base line, but differences emerged after an average of 29 months of observation in the high-practicing group in the anterior midbody of the Corpus Callosum (which connects premotor and supplementary motor areas of the two hemispheres).”

“Our results show that it is intense musical experience/practice, not preexisting differences, that is responsible for the larger anterior Corpus Callosum area found in professional adult musicians.”

1. Science Just Discovered Something Amazing
2. Research Shows Piano Lessons Alters the Brain
3. Musicians Really Do Think Outside the Box
4. Piano Players Are Master Multitaskers
5. Your Aging Brain Will Be In Better Shape

SCIENCE JUST DISCOVERED SOMETHING AMAZING ABOUT WHAT CHILDHOOD PIANO LESSONS DID TO YOU
By Tom Barnes | Jan. 8, 2015
Washington Post

If your parents forced you to practice your scales by saying it would “build character,” they were onto something. The Washington Post reports that one of the largest scientific studies into music’s effect on the brain has found something striking: Musical training doesn’t just affect your musical ability — it provides tremendous benefits to children’s emotional and behavioral maturation.The study by the University of Vermont College of Medicine found that even those who never made it past nursery rhyme songs and do-re-mi’s likely received some major developmental benefits just from playing. The study provides even more evidence as to why providing children with high-quality music education may be one of the most effective ways to ensure their success in life.The study: James Hudziak and his colleagues analyzed the brain scans of 232 children ages 6 to 18, looking for relationships between cortical thickness and musical training. Previous studies the team had performed revealed that anxiety, depression, attention problems and aggression correspond with changes to cortical thickness. Hudziak and his team sought to discover whether a “positive activity” like musical training could affect the opposite changes in young minds.

“What we found was the more a child trained on an instrument,” Hudziak told the Washington Post, “it accelerated cortical organization in attention skill, anxiety management and emotional control.”The study found increased thickness in parts of the brain responsible for executive functioning, which includes working memory, attentional control and organizational skills. In short, music actually helped kids become more well-rounded. Not only that, they believe that musical training could serve as a powerful treatment of cognitive disorders like ADHD. We need this sort of proof now more than ever.

In presenting their findings, the authors reveal a terrifying truth about the American education system: Three-quarters of high school students “rarely or never” receive extracurricular lessons in the music or the arts. And that’s depriving kids of way more than just knowing an instrument. School systems that don’t dedicate adequate time and resources to musical training are robbing their kids of so much. Prior research proves that learning music can help children develop spatiotemporal faculties, which then aid their ability to solve complex math. It can also help children improve their reading comprehension and verbal abilities, especially for those who speak English as a second language.In these ways music can be a powerful tool in helping to close the achievement gaps that have plagued American schools for so long. It’s even been shown that children who receive musical training in school also tend to be more civically engaged and maintain higher grade-point averages than children who don’t.

In short, musical education can address many of the systemic problems in American education. Hudziak’s research is an important addition to the field because it shows that music helps us become better people, too. One thing is clear: Learning music is one of the best things a person can do. Who knows — running scales may have changed your life. And it could change the lives of future generations too.

Studies by the University of California, Irvine drew similar conclusions. https://elitemusic.ca/research-shows-piano-lessons-alter-brain-function/ A true pianist’s brain is different from that of anyone else. The brain of a pianist differ from other musicians such as drummers or guitarists . . . . Pianists transform their brains into organs that increase the mind’s efficiency in numerous ways. Dr. Ana Pinho has studied the brains of jazz pianists, and found that parts of the brain’s frontal lobe have extremely efficient connections in these artists compared to non-musicians. This integration of massive amounts of information used to make decisions takes place in the frontal lobe. Other responses triggered by the brain such as social behavior, spontaneity, language, problem solving are affected as well.

MUSICIANS REALLY DO THINK OUTSIDE THE BOX
Researchers at Vanderbilt University have discovered that musicians are innately proficient in a creative technique they call “divergent thinking, which is the ability to come up with new solutions to open-ended, multifaceted problems.” Their work suggests that because playing music enhances communication between parts of the brain, musicians literally think about complex problems differently, and come up with more creative solutions

Learning to play piano means teaching your brain how to work on overdrive. Think about all the individual tasks your brain has to perform simultaneously: keeping time, following pitch, forming chords, maintaining posture and controlling your breath, all while your right and left hands are operating independently from each other while ranging over 88 identical little black and white buttons. Also, you might be operating the pedals and reading and interpreting sheet music too. Every time you sit down to play piano, you’re giving your brain a monster workout, exercising your logical, creative, visual, auditory, emotional, and motor functions.The mental demands of piano are so significant that players’ brains are structured differently than other people’s. Breakthroughs in brain imaging have shown that playing piano strengthens the bridge between the right and left hemispheres of the brain, and makes the connections in the frontal lobe much more efficient. That means pianists may have a serious leg up in terms of “problem solving, language, spontaneity, decision making and social behavior.” 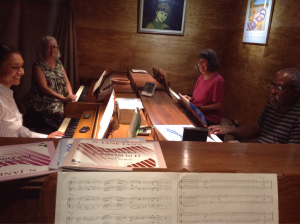